A strong argument for the cause of running cramps, which I mentioned earlier, is muscle fatigue - Research done by Professor Martin Schwellnus in 2009 shows that muscle fatigue causes an irregular neuromuscular response which leads to cramping

(this is where things get technical…)

Your muscles contract when a signal from the motor cortex in the brain travels down your spinal cord then out to the muscle fibres along the alpha motor nerve. Once there it stimulates the muscle to contract…

“Spindles” (which are tiny structures in the muscle fibres) fire up and contract the muscle; this is to protect the muscle from overloading or over-stretching

Research shows that when muscle becomes fatigued the spindle activity increases and the Golgi tendon organ activity decreases which, for you and me, means that the muscle keeps contracting and then doesn’t relax – or, simply put – ‘cramp’ 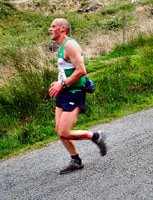 What does this mean for runners?

Well, because this is a fatigue problem, you can pace yourself to run more slowly, thus putting less strain on your muscles – in other words avoid pushing to your limits on long runs until you are accustomed to the distance, especially marathons

PB’s can wait for now

To avoid running cramps look at the fatigue factors first and then follow the advice on this list:

Try loosening exercises before a run, knee circles, hip flexors and so on - this will help stiffness and doesn’t involve stretching muscles, which are usually cold before a run.

During a long run or intensive training you might detect the onset of cramp – usually little twitches in the muscles or small spasms. You can try slowing down your pace for a minute or two, or slow down altogether to a slow jog or walk, and then build back up - but slowly

If you are in a marathon and cramp kicks in you might want to scream and punch somebody – but instead take a minute or two to stretch the affected muscle, this will likely trigger the ‘relax’ response if you are patient and thorough

– my calf is usually the culprit so calf lifts on a nearby curb usually does the trick for me ;-)

Don’t rush it though; the time you take now could be the difference between running the rest of the way or walking and losing your time 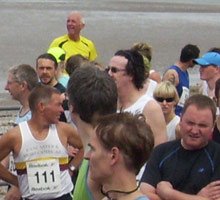 If every time you run a marathon you break down with running cramps in the later stages – don’t despair, you are not alone! - Keep trying different strategies, make improvements where you can and keep your eyes open for possible clues

Personally speaking I overcome running cramps in marathons by changing my footwear drastically (I made the transition from thick padded running shoes to minimalist running shoes) - this helped me to improve my running form significantly (encouraging forefoot landing during the running stance instead of heel striking) which meant less strain on the calf muscle which is where I usually get the cramp. Might not be for everyone but minimalist running gives you a different option if other things have failed (see here for transition advice)

Maybe someone, someday soon will find the direct cause for running cramps and put this mystery to bed once and for all...

Maybe we should all run barefoot (another story)