Can Running Cramps Be Prevented?

Even though more research is being done on the subject of running cramps, there is no real evidence to show us what actually causes them - this makes cramp-prevention a bit tricky, but still possible...

If you run marathons and typically get cramp around mile 20, you are one of the many marathoners who would probably give their right leg to know how to avoid them

OK, maybe not your right leg...

- you still have other options :-)

Marathon runner or not though - there are measures you can take to avoid running cramps, even if we don’t know for certain what the cause is. You just need to look at the problem from a different angle and see what works

- and that is what this section is all about ;-)

Here, we consider some of the recent research done on the cause of cramps and then put a plan of action in place – preventative action - which could mean the difference between spoiling a race or smashing that PB you’ve got one eye on

Sound good to you..? 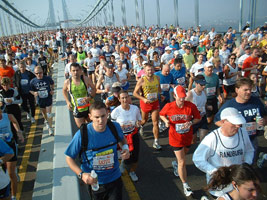 Painful cramps occur when the muscle contracts and doesn’t relax, this is an involuntary action and usually very painful - often they happen in endurance running such as marathons, as well as intensive workouts such as interval training and tempo runs

Cramps can occur in any muscle, but for a runner the main areas affected are thighs, calves, feet and the side of the torso (runners stitch)

Even though there is no proof as to what actually causes running cramps, here are some usual suspects:

The chances are that one of these (or a combination) could be a cause of cramp. From what I have researched so far though, muscle fatigue seems to be the most likely cause from these

If you have trouble with cramp the best strategy is to consider each point individually from the list, cross out the ones which are definitely not the cause - medications if you take none, dehydration if you drink plenty of water and so on,

- then consider the ones which are still left on the list and target the ones you think are the most likely to be causing cramp and follow on from there...

Electrolytes are minerals including magnesium, potassium, calcium and sodium - all these help the muscle cells to behave properly. So it would seem fair to say that a deficiency of these electrolytes could be a cause of cramp 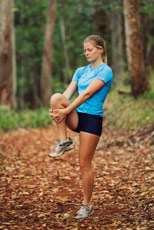 - What about warming up and stretching, would these help with cramp-prevention?

This hasn’t been discounted by scientific research and I think stretching and warming up just makes sense. The idea is to loosen up and stretch out your muscles before an intensive workout and as long as you stretch muscles which are warmed up – after a run or walk – you can only be doing good rather than harm

And could possibly prevent running cramps if practiced regularly ;-)