The Tarahumara– Barefoot Runners Of The Copper Canyon 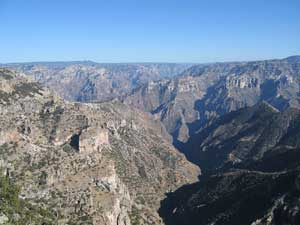 These canyons in the state of Chihuahua are an extreme, rocky and yet eerily beautiful place to exist, but to run 50 to 100 miles a day through them, either barefoot or wearing old car tyres on your feet?

Well that just seems a bit masochistic to me!

Yet this is just what the Tarahumara, a tribe of native Mexican Indians, do. They are the semi-nomadic people who were brought to the world’s attention by Chris McDougall’s book Born to Run

- the epitome of minimalist running who go against all the normal conforms of running long distances. You won’t catch them doing warm-ups or stretches, no motion control running shoes or energy gels to keep them going…

They drink strong alcohol and smoke, especially on the nights leading up to their inter-village races – not exactly an athletic lifestyle is it?

So how do they do they manage to run these distances, every day, in the intense heat and over such extreme terrain?

Originally the Tarahumara occupied most of the state of Chihuahua in Mexico, and then the Spanish arrived in the 1500s and discovered that silver and copper could be mined in the area which meant (inevitably)that the local population would be used as slaves to work in the mines 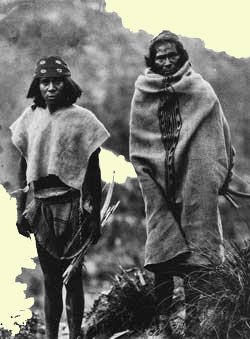 They became split as some stayed in the lower regions and the rest retreated into the higher canyons. They were defeated in battles against the Spaniards and by the beginning of the 18th century had lost over half their population to battle or slavery

They still battle deforestation today and despite our so called enlightened times, these people are still being persecuted and enslaved - this time by the drug industry who take their land for growing marijuana and the opium poppy. If they refuse to work for them they are shot

The government spray the drug growing fields killing the crops but this also kills the corn, bean and squash crops of the Tarahumara which grow alongside them. This is not the only symptom of the modern age which is affecting their way of life

The growing number of tourists to the area have given rise to plans for an airport and hotel complexes to be built in the canyons, so it would seem that the shy and peaceful Tarahumara people will once again be forced to retreat and disappear further into the mountains, if they are to be allowed to continue with their traditional existence

Okay...that’s enough history, now back to the running ;-)

The Tarahumara diet typically consists of 10% protein, 10% fat and 80% carbohydrate

Corn is the mainstay of their diet which they also make beer from which is brewed at different strengths. The weak version is drunk daily and the stronger stuff is kept for their religious celebrations and races, when they drink it the night before they race

Their diet is practically meatless so meat and fish is kept mostly for celebrations and feast days (their method of fishing consists of throwing sticks of lit dynamite into the water and then diving in to collect the stunned fish. Should catch on here in the UK!)

Hardly the ideal runner’s diet, but then again who are we to argue? These guys run 100 miles a day or more and consider the marathon to be a sprint!

State of the Art Running Shoes?

Just the opposite in fact…

When not walking and running barefoot, the Tarahumara wear a homemade sandal called the huarache. They look a little like old fashioned roman sandals and were probably introduced by the Jesuit priests who came with the Spanish

Wonder how Nike would market these running shoes?

Racing the Rest of the World

Two Tarahumara men, or Raramuri as the men call themselves, were famously entered into the 1928 Olympic Marathon. Not knowing the length of the course they finished crying, “too short, too short!” (… and that’s what I always shout at the end of a marathon. Of course)

Nothing else is documented about the Raramuri racing until they appeared on the ultramarathon circuit in 1992 at the Leadville 100 mile foot race. This was a disaster as they didn’t know the course and held up the torches they were given, straight up as if they were their own flame torches!

At the food and drink stations they would not take food or water because, in their culture, you only take that which is offered to you. The race wardens were not aware of this so they failed to finish, suffering under nourishment and dehydration

The next year they entered again, now familiar with the course, how to use the food and water stations and shown how to use the flash lights properly. Unsurprisingly they finished 1st, 2nd, and 5th, but what was surprising was that the winner (55 years old) ran the second half only 20 minutes slower than the first – this was a 100 mile race for Pete’s sake!

In 2003 Micah True (Caballo Blanco) organised the first ever Copper Canyon Ultramarathon to raise funds and food crops for them – there were only a few entrants at first, but the race soon grew to become a famous event attracting ultra-runners from around the world, as well as the Raramuri runners

Arnulfo Quimare won the 2006 Copper Canyon Ultramarathon – another Raramuri victory but this one was extra special because it included some of America’s finest ultra-runners, invited along by Micah True

Caballo Blanco and the Tarahumara 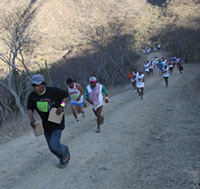 American ultra-runner and cult hero, Micah True, spent many years running with the Raramuri, learning their ways and gradually building a strong relationship with them - he even built a little hut in the canyons to be close to them, leaving his western life behind him. Known by the locals as “El Caballo Blanco” (the White Horse), he became somewhat of a guardian angel watching over them – a fierce protector of their way of life and suspicious of any outsiders who tried to contact them

The Copper Canyon Ultramarathon, now known as the Ultra Marathon Caballo Blanco, continues to attract runners from around the world - the event is in good hands, organised by True’s girlfriend Maria Walton and ultra-runner Josue Stephens (race director) - they continue raising funds and food crops for the Tarahumara - hats off to them

True’s legacy lives on and the Tarahumara are given the continued freedom they deserve. Long may it continue..!

Persistence Hunting. Here we look back on Human Evolution and try to understand why running has played such an imprtant part in our continued development. More...

The History of Running - from hunting for food to the running-craze which surrounds us today, here we explore the background of our no.1 obsession :-) more...

To return from the Tarahumara page back to the home page click here...